The GABRIEL project had its final review meeting held in Brussels on 28th 29th August 2014. The participants have discussed the recently closed work packages and the related deliverables.

The first day of meeting started at 10 am 28th of August, 2014 according to the agenda. Prof. Rohacs, the coordinator of the project has started the meeting with the introduction. He mentioned that the Gabriel project was running for three years and now it is close to end by the final consortium meeting and the final review meeting (Day2).

The meeting started with those work packages where the focus of the work was in the second period with some deliverables closing only recently. So the first presentation was related to WP4 – Concept Validation.

The first presenter was Norbert Siepenkötter from Aachen. He presented: D4.4 – Ground system specification and development.

The next presenter was Cesari Szcepanski from Wroclaw on D4.8 – Evaluation of the test results.

The presentations continued with WP5 – Impact assessment. The presenter was Andrzej Majka from Wroclaw and the subject was D5.2 – Emission and greenhouse effects related to the GABRIEL concept.

Peter Schmollgruber from ONERA presented D5.3 – Effects of GABRIEL Concept on the air Transportation Sustainability. He described the calculation on environmental benefits from a wider dimension: energy, global warming, atmosphere acidification and disposal/recycling (waste) were angles of the analysis. Besides there were a life cycle approach from manufacturing through operation to disposal the whole process was considered, including the difference between a traditional concrete runway and a maglev one. The benefits are clear despite the fact that GABRIEL followed a conservative approach when measuring the environmental benefits.

Frans van Schaik from NLR presented the D5.9 – Integration aspects and critical areas. As he mentioned this task was a kind framework task for many activities for GABRIEL as it shows the operational scenarios of the system at the airport and in the air. He referred back to the workshops with pilots (NLR 2013, SLOT 2014) and on the bases of that and the analysis he concluded that although it is difficult to judge the future in detail, it is likely that the GABRIEL system will have no major influence on the coming ATM system, it can fit well.

The main results of the project are shown below.

The concept needs further analysis on the following items:

The meeting concluded with the presentation of Mr. Eric Lecomte. In overall the Commission is satisfied with the in time delivery and the content of the reports.

The consortium introduced in detail the GABRIEL concept and presented the work done in the frame of the GABRIEL project.

The agenda of the workshop was as follows: 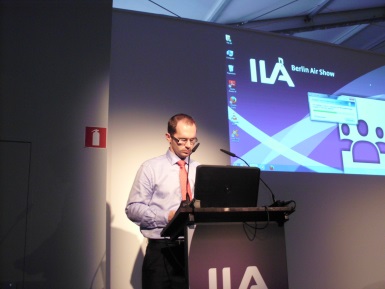 The FP7 GABRIEL project focuses on the feasibility and preliminary design of a system to launch and recover medium sized aircraft on a track powered by Magnetic Levitation. Such a system will allow a substantial saving of fuel since the aircraft weight can be reduced as no landing gear is needed, no undercarriage fairings are needed which also reduces drag and smaller engines can be used. This will result in substantial savings in fuel cost and lower CO2 emissions during take-off and landing as well as cruise. Further cost savings are possible as no maintenance is needed on the landing gear and engine thrust reversers. Thanks to ground power assisted take-off, the emissions and noise at and near airports can be reduced as well. The cart on which the aircraft is placed will allow electric taxi at the airport and autonomous push back from the gate, thereby further reducing emissions and cost. 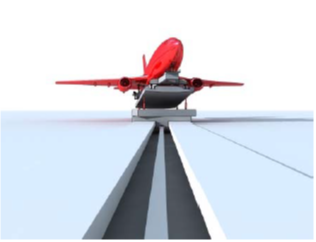 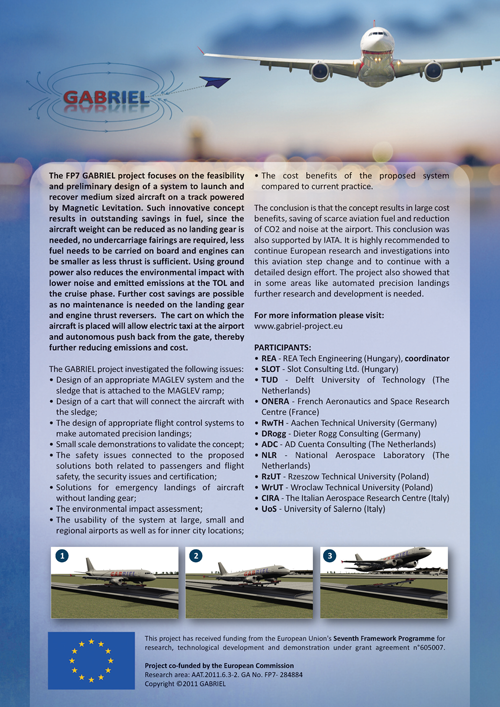 The conclusion is that the concept results in large cost benefits, saving of scarce aviation fuel and reduction of CO2 and noise at the airport. IATA also supported this conclusion. It is highly recommended to continue European research and investigations into this aviation step change and to continue with a detailed design effort. The project also showed that in some areas like automated precision landings further research and development is needed.

The consortium has prepared a leaflet for this occasion:

The GABRIEL consortium had a successful progress meeting in Wroclaw Poland. The meeting was hosted by the Wroclaw University of Technology. The University belongs to the best technical universities in Poland – over 35 000 students study here under the guidance of 2 000 academic teachers, at the 12 faculties and the Department of Fundamental Studies, as well as in the 3 regional branches (Jelenia Góra, Legnica, Wałbrzych). It rates high in the annual rankings of Polish universities. Recently, it has been announced the best Polish technical university in Webometrics Ranking of World's Universities.

The goals of the meeting were to evaluate the progress of the project, to get familiar with the test bench built by the polish consortium members and to discuss the upcoming GABRIEL Workshop to be held in the frame of ILA Berlin Air show 2014 on 20th May.

The consortium members have visited the laboratory where the 9 meters long MAGLEV track being built and become familiar with structure of the track and the sledge that using it. They also discussed the software that controls the installation as the Aachen University is building the model aircraft that will land on the moving sledge and also has created the software that controls the landing. For the successful experiment those two applications should communicate with each other and synchronise the movement of the model aircraft and the sledge on the magnetic track. 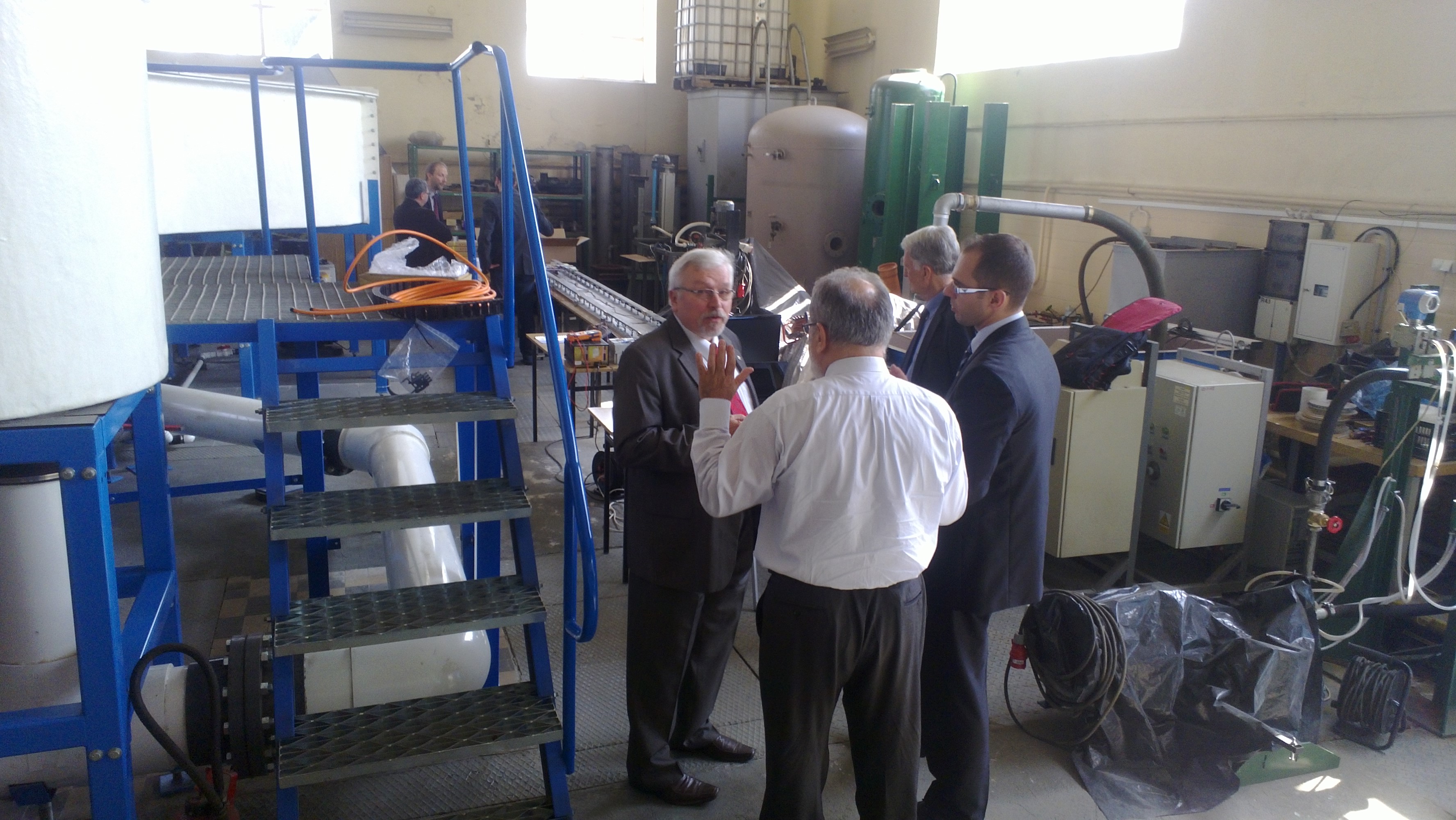 In the laboratory the consortium members also have seen the UAV built by the Wroclaw University’s scientist that is capable of autonomous flight. It flights from one predefined point to another using GPS data and avoids obstacles in the process by using on board video and laser equipment. The predefined points could be change during the flight remotely so that the destination or route of the UAV can be changed during the flight. 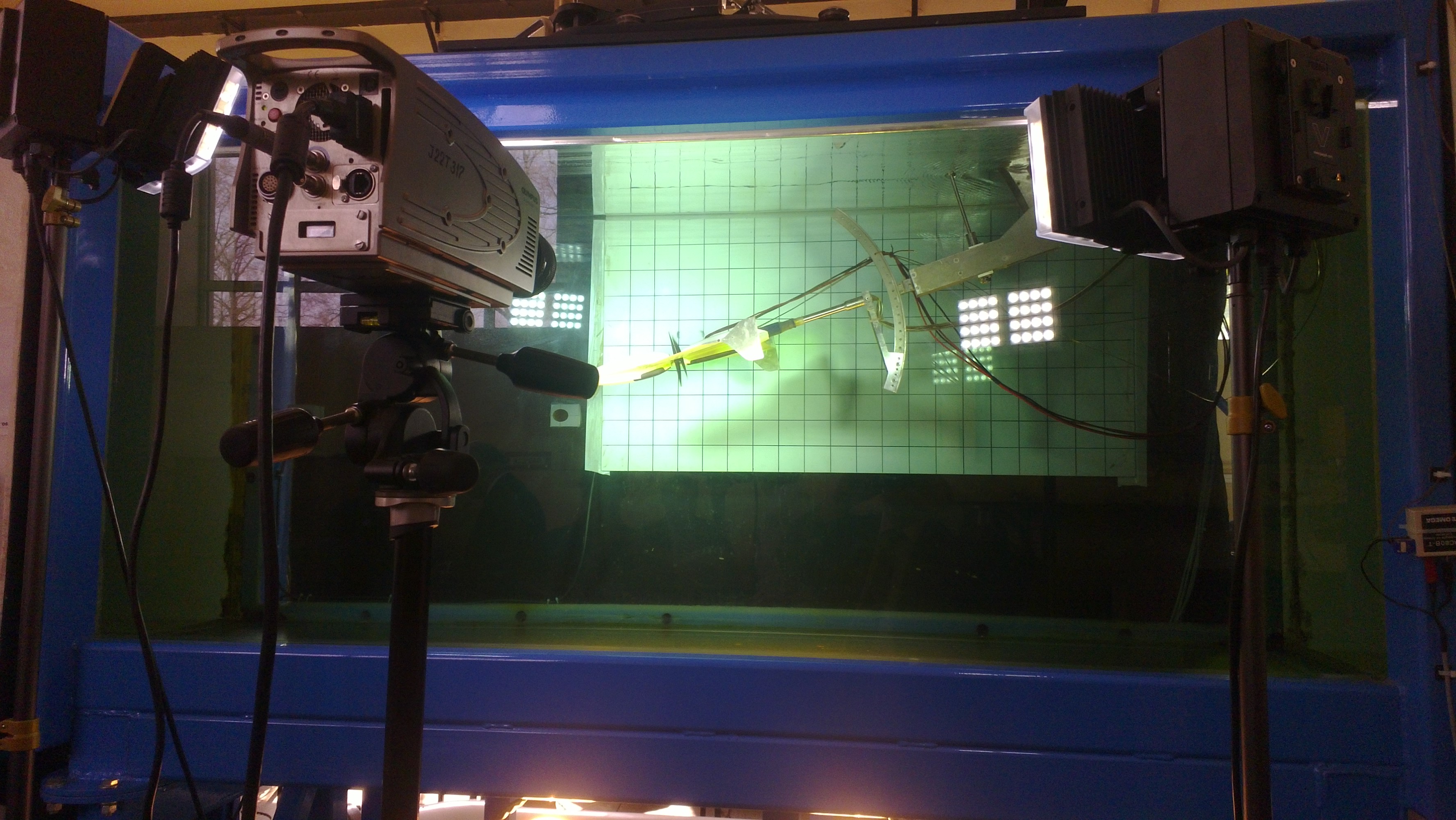 The scientists of the Wroclaw University also have showed the water tunnel that allows making experiments with aircraft and wing shapes providing better visibility and data at slower speed that the wind tunnels usually.

The GABRIEL consortium had its regular progress meeting in Rome organised and hosted by CIRA on 19-20 September. The goal of the meeting was to discuss the progress achieved during the last period and to synchronise further actions. Beside that the new design of the magnetic track was discussed that will allow lower energy consumption and decreased requirements for the power chain yet simultaneously providing enhanced lateral stability to the system. The new aircraft modifications were also discussed that allow further fuel saving thus resulting lower emissions.

The GABRIEL project consortium had its midterm meeting in Brussels. The meeting was hosted by Regione Campania by support of CIRA on 12th and 13th March 2013. The meeting was organised by REA and SLOT with the participation of all consortium partners. The first day of the workshop was devoted mainly to the progress of the project work. On second day the consortium partners have presented the accomplished project work and results achieved to the participating project officer.

The GABRIEL Consortium meeting in Prague

The Gabriel Consortium had a two day meeting in Prague. The first day was dedicated to the reports on the progress made since last meeting. Also the consortium partners have prepared for the public presentation to be delivered on the EASN Conference that was held same day in Prague. Then Professor Jozsef Rohacs presented the GABRIEL concept and the progress achieved so far on the EASN Conference. Meanwhile the consortium partners have discussed the details of the sledge, cart and the fixing mechanism that is required. The discussion results and the selected solutions will enable the consortium to carry out further calculations regarding the needed power chain and build more precise computer simulations.

On the second day the consortium had the Expert Group meeting where concept and the so far achieved results were presented. After that a discussion was held with the participation of the experts. The experts have expressed their concerns towards the impact of the concept on the ground operations and the issues of the implementation. The consortium has decided that these aspects should be further elaborated. Furthermore the details of magnetic levitation and the propulsion system were discussed where the consortium gained additional information on the topic worth considering.

Representing the GABRIEL project Mr Daniel Rohacs has delivered a presentation on “Preliminary Evaluation of the Environmental Impact related to Aircraft Take-off and Landings supported with Ground Based (MAGLEV) Power” on the ATOS Conference that was organised in Toulouse, France on 8-10 July 2012. The paper submitted can be downloaded from Overview page or by clicking here.

The GABRIEL consortium had its second meeting in Delft, Netherlands on 3-4 April 2012. The organiser and host of the meeting was the Delft University of Technology (TUDelft http://home.tudelft.nl/en/). The goal of the meeting was to finalise the results of the second workpackage and to provide appropriate input for start-up of the third workpackage

The GABRIEL project had its first management meeting in Toulouse, France in organisation of the ONERA (Office National D'études ET De Recherches Aérospatiales http://www.onera.fr/). The participants provided the overview of the work done and discussed the next steps of the project.

GABRIEL (Integrated Ground and on-Board system for Support of the Aircraft Safe Take-off and Landing) Level 1 project has started and had its kick-off meeting in Budapest, Hungary at premises of the Budapest University of Technology and Economics (http://portal.bme.hu/default.aspx) on 14th – 15th September 2011. Consortium partners with the support of the EC project officer have discussed the overall project activities, the way that the work packages are relay on each other’s results and the communication needs. As the project needs the support of the user group the questions of the user group members and issues of external communication were also discussed.